History of the Newcomb-Stillwell Mansion

The 2 1/2 acre lot was purchased by Mr. Richard F. Newcomb for $11,000 on April 10, 1880 and originally had a Greek revival home on the site. Newcomb had that house razed to make room for the home we see today. 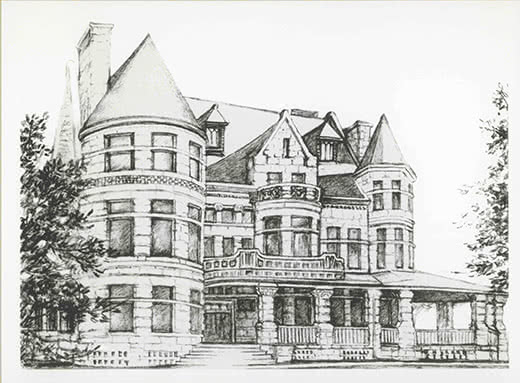 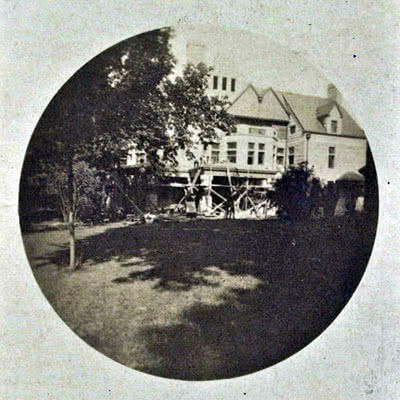 Newcomb-Stillwell Mansion Under Construction in 1891

Building of the Newcomb-Stillwell Mansion

The house was built of buff colored Berea Sandstone in the Richardson Romanesque Revival Style. This architectural style was named for Boston architect Henry Hobson Richardson whose work set a new standard and direction for American architecture. The sandstone was mined from the Berea Formation near Amherst, Ohio, about 25 miles west of Cleveland.

Careful attention to detail is shown by the stone carvings extending from ground level to chimney top.

The Richardson Romanesque style of architecture characteristically shows a broad, round arch as well as massive stone exterior with spiky or leafy architectural ornamental carvings. The broad arch design is a prominent feature of the west facade of the building at the third floor level.

The gutters and down spouts are made of copper with large ornamental scuppers.

The front porch has a total of seven pillars supporting its roof. No two capitals are alike. In fact each side of every capital represents a unique design. The lion face at the porch roof level on the east side is especially noteworthy.

The porch on the north side of the building has been completely restored and offers a shady respite during the heat of a summer afternoon.

The house was heated primarily with steam heat and the basement contained not only the furnace, hot water heater and laundry but also a wine cellar and, at one time, a bowling alley.

The plan of the house features a central living hall around which were grouped a formal parlor and den on the west side and an informal sitting room and dining room on the east side, as well as a library.

Today, as when the house was built the entrance is off the front porch into the Great Hall. One cannot help but be impressed with the very large solid oak front door which is 54 1/2 inches wide. The kitchen is located in the north east corner where the old built in ice box and speaking tubes can still be seen.

The second floor featured a generous central hall, which is still there. Bedrooms for the Newcomb daughters were on the west and north side and there was a double suite for Mr. and Mrs. Newcomb on the east side. Mrs. Newcomb's bedroom has been restored and Mr. Newcomb's bedroom now houses the Museum gift shop. The remainder of bedrooms on this floor are used for exhibitions.

The interior of the house is notable for the variety of fine woods used in its construction. There were quarter-sawn oak, mahogany, birch, walnut and pine on the first floor; cherry, sycamore, yellow pine and quarter-sawn oak on the second floor; and butternut, yellow pine and cedar on the third floor. Also worth noting is the elaborately carved wood in the central hall, the decorative art-glass in a great number of windows and wood carvings above the door and windowsills in all rooms from the first through the third floors.

The hardware fixtures are of considerable interest and each floor has its own separate pattern on the door handle, hinges, locks on shutters, pulls, etc. Those on the first floor are of a rather fancy floral design and it will be noted that even the interior of the hinges shows the pattern. The fancy metal plates on the sliding doors of the rooms on the first floor are silver-colored on the interior or room side, and bronze-colored on the exterior or hall side.

In the first floor sitting room (south east corner of the first floor) the woodwork was not painted when the house was built but over the years five coats of enamel hid the beautiful birch wood. This paint was carefully stripped away and the original birch wood exposed.

The adjacent room was the library and originally had bookshelves shelves with glass fronts which were mounted on tracks. The  cabinet that is there today was present then. Under the windows were window seats with pillows covered in dark red or maroon colored velvet. The drapes were hung on a semicircular rod which was the same width as the windows.

After the death of Richard Newcomb, Newcomb's daughter, Mrs. John Stillwell moved into the home. The Stillwells redecorated the house in the 1920's and new French windows were put in the dining room, facing east. They also added a fresco around the upper part of the walls. Canvas was applied to the wall and painted. In addition canvas was also applied to the underside of the ceiling beams and painted with peach leaves on a gold background. The original sconces have been replaced with modern Waterford crystal fixtures and the chandelier is an antique replacement of the original.

While most of the original furnishings were removed when the Stillwell's passed away in the 1930's , a few pieces have been returned to the home. Notable are the library table in the Den, the dining table and chairs in the Dining Room and Mrs. Stillwell's writing desk in the Library.

After the death of the Mr. and Mrs. Stillwell in the 1930's, the building was offered to the City of Quincy for purchase for use as a library. When the offer was turned down, the building was offered to Quincy College. During the time Quincy College owned the building, it was known as Stillwell Hall. The mansion served as a headquarters for the Red Cross, as a dormitory for participants in the Civilian Pilot's Training Program during World War II, as a dormitory for male and female students, and as a residence for seminarians. The last tenants of the building were the School Sisters of Notre Dame, who lived here until about 1980.

With the increased availability of on-campus housing, Quincy College made the decision to sell Stillwell Hall. The Board of Directors of the Quincy Indian Museum, then located on Quinsippi Island, leased the building for one year with an option to purchase. After two years of fund raising, and with the help of an anonymous donor, the building was purchased by the Quincy Museum, Inc. and became known as the Newcomb-Stillwell Mansion.

Since the Quincy Museum purchase of the Newcomb-Stillwell Mansion, the building has undergone over a million dollars worth of renovations and repairs, all funded through private grants and donations. The museum receives no Federal, State, or City taxpayer dollars. The building and the museum it houses are a testament to what is possible when a community works together to accomplish a seemingly impossible task. 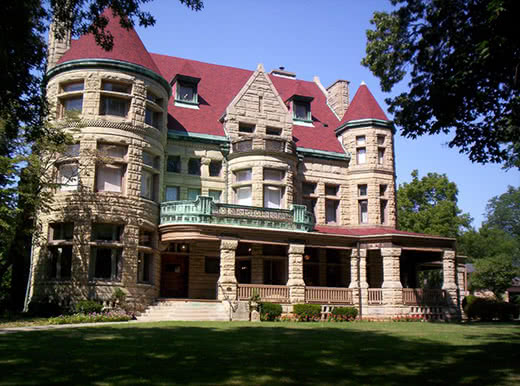 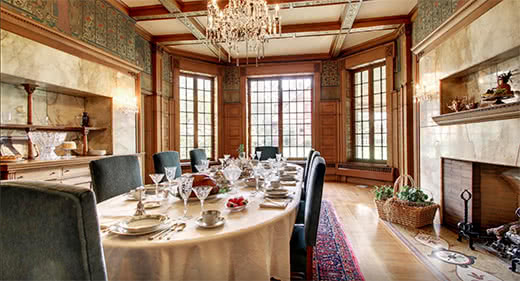 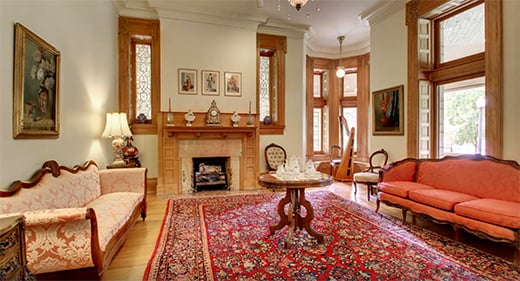